The Centers for Disease Control & Prevention (CDC) today says its counting 1,017 confirmed cases of Salmonella Saintpaul in 41 states, the District of Columbia, and Canada.   West Virginia appears to be the latest state with a case added to the count.

We found some of the commentary in CDC’s statement today interesting.  Take this:

eaten by persons who were ill in May to foods eaten by well persons identified consumption of raw tomatoes as strongly linked to illness. 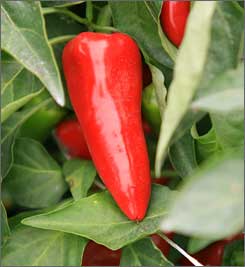 A similar but much larger, nationwide study comparing persons who were ill in June to well persons found that ill persons were more likely to have recently consumed raw tomatoes, fresh jalapeno peppers, and fresh cilantro. These items were commonly, though not always, consumed together, so that study could not determine which item(s) caused the illnesses.

The U.S. Food & Drug Administration (FDA) has NOT moved off its now 30+ day "warning to consumers nationwide that an outbreak of Salmonella serotype Saintpaul, an uncommon type of Salmonella, has been linked to consumption of some raw red plum, red Roma, round red tomatoes, and products containing these raw tomatoes."

Today, however, CDC goes on to say:

Recently, many clusters of illnesses have been identified in several states among persons who ate at restaurants. Most clusters involve fewer than 5 ill persons. Three larger clusters have been intensively investigated. In one, illnesses were linked to consumption of an item containing fresh tomatoes and fresh jalapeno peppers. In the other two, illnesses were linked to an item containing fresh jalapeno peppers and no other of the suspect items. The accumulated data from all investigations indicate that jalapeno peppers caused some illnesses but that they do not explain all illnesses. Raw tomatoes, fresh serrano peppers, and fresh cilantro also remain under investigation. Investigators from many agencies are collaborating to track the source of the implicated peppers and other produce items.

Head down below to the Extended Entry for the big map and more commentary from CDC.

Cases infected with the outbreak strain of Salmonella Saintpaul, United States, by state, as of July 8, 2008 9pm EDT Among the 744 persons with information available, illnesses began between April 10 and June 26, 2008, including 300 who became ill on June 1 or later. Many steps must occur between a person becoming ill and the determination that the illness was caused by the outbreak strain of Salmonella; these steps take an average of 2-3 weeks. Therefore, an illness reported today may have begun 2-3 weeks ago. Patients range in age from <1 to 99 years; 50% are female. The rate of illness is highest among persons 20 to 29 years old; the rate of illness is lowest in children 10 to 19 years old and in persons 80 or more years old. At least 203 persons were hospitalized. One death in a man in Texas in his eighties has been associated with this outbreak. In addition, a man in his sixties who died in Texas from cancer had an infection with the outbreak strain of Salmonella Saintpaul at the time of his death; the infection may have contributed to his death.

Only 6 persons infected with this strain of Salmonella Saintpaul were identified in the country during April through June of 2007. The previous rarity of this strain and the distribution of illnesses in all U.S. regions suggest that the implicated food is distributed throughout much of the country. Because many persons with Salmonella illness do not have a stool specimen tested, it is likely that many more illnesses have occurred than those reported. Some of these unreported illnesses may be in states that are not on today�s map.

Health officials have worked continuously since late May to investigate this outbreak. CDC has sent 20 people to the field to work with other public health officials. The investigation is complex and difficult. One difficult aspect is that people often have difficulty remembering exactly what foods they ate, and remembering specific ingredients in those foods is even more difficult. Although laboratory testing of foods might help identify the source, perishable foods that were consumed by ill persons are often not available to test. When food items are mixed together and consumed in the same dish, all the items may be statistically linked to illness. In that case, determining by statistical means which item caused the illness can be difficult or impossible. Tracing suspect produce items back to processors and growers is an integral part of the effort to identify a single source and a possible means of contamination.